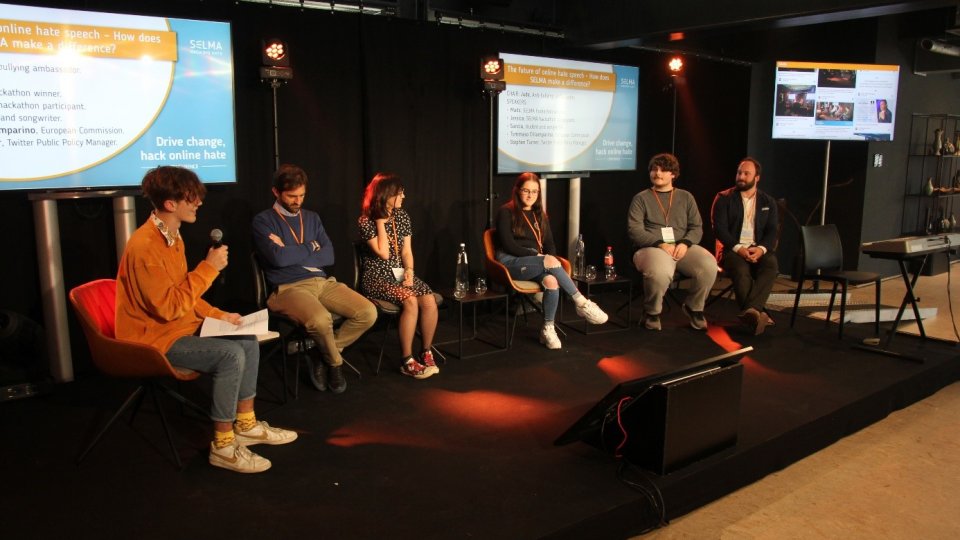 Drawing upon the achievements of the SELMA project, participants discussed how to tackle the problem of online hate speech through education and how to empower young people to become agents of change.

Alex Holmes, Deputy CEO of The Diana Award, gave the opening speech by looking back on his personal experience of hate speech as a teenager and the hostility, violence and discrimination he faced those days. While doing so, he reflected on how hate speech has truly become a societal problem which requires much-needed answers. “When you think about my father’s hate speech perpetrators, they went to some pretty extensive lengths. It doesn’t take any dedication now at all, it takes a couple of taps on a keyboard and pushing send”, he stated.

Holmes also talked about the role of awareness and education and reflected on how projects like SELMA can have a real impact on teenagers’ wellbeing. Empowering young people and helping them understand emotions is key because they can become change makers. "The things that make you different are actually strengths in disguise”, he concluded.

The keynote session was followed by a speech of Stelios Kympouropoulos, Member of the European Parliament on the importance of addressing online hate speech through policy and education efforts.

Brunno highlighted the need of tacking online hate speech in schools because currently hate messages impact society and politics. “Nowadays digital citizenship is an emergency. It is very important to use tools like the SELMA Toolkit in schools to teach students how to use technology for learning but also to learn how to live and socialize online”, she summarised.

Pieters recognised the important role of the No Hate Speech Movement in activism against hate speech but he noted that it was lacking the educational dimension that SELMA brings to the table. He also highlighted the importance of using Social and Emotional Learning (SEL) to address hate speech. “As a media literacy educator, we always analyse media but it is also quite important to talk about emotions. We used to look at hate speech and propaganda from a very objective perspective but we ignored to emotional part. Now, with the SELMA Toolkit, I can say: you should talk about emotions and this is how you should do it.”

Participants also had the opportunity to actively engage in a variety of hands-on workshops organised by the SELMA partners. Through this SELMA Exploratorium, they discovered the SELMA Toolkit in action, how to use it with young people, and how to develop and create their own awareness campaigns and activities.

In the “Flexing the SELMA activities” workshop, the SELMA Toolkit creators asked participants to test some materials to discuss afterwards how to use them with different student groups. In “The algorithm of hate speech workshop”, participants created their own visual flow chart to identify hate speech, which helped them understand the problems defining it.

Participants of the “Giving hate a platform?” workshop went through “The Platform dilemma” activity of the Toolkit, which encourages people to discuss what they would do if they were invited to a debate with a person accused of spreading hate. In the “Hacking Hate in the classroom” workshop, participants learnt some tips and tricks on how to deal with the topic of online hate in the classroom. Classroom activities should be engaging and should involve everyone. On the other hand, they should also be safe for all members of the classroom and not result in more controversy. Participants also discussed what hate messages are most unpleasant using this online tool.

Participants of the “Anti-Hate Speech Campaign Photo Shoot” workshop created their own campaigns against hate speech in just one hour. Ideas such as #GlitterAgainstHate, #Giveaheart, or “just flip hate for love” came up.

During a subsequent open mic session, participants shared their ideas from the “Anti-Hate Speech Campaign Photo Shoot” workshop and reflected on the most relevant Tweets posted with the conference hashtag #HackHateConf through the day.

The future of online hate speech - How does SELMA make a difference?

The last panel discussion of the day looked at the future of online hate speech, and gave the floor to young people in particular. Jude, Anti-Bullying Ambassador from the United Kingdom, moderated the panel session with Mads (SELMA Hackathon winner) Jessica, (SELMA Hackathon participant), Sancia, a young songwriter from Northern Ireland, Tommaso Chiamparino, representative of the European Commission and Stephen Turner, Public Policy Manager at Twitter.

The panel started with a video from Mads presenting the winning idea of the SELMA Hacking Hate hackathon, a fair game platform to reward good behaviours in online games. Afterwards, Sancia delighted participants singing a song about why she feels we should all be tackling online hate speech. She composed it by herself when hearing back from the UK hackathon team. After that, Chiamparino and Turner addressed the questions from young people about the role of social media platforms and policy makers in fighting online hate speech.

Turner talked about how Twitter addresses hate messages while trying to respect freedom of expression. When he was asked about Donald Trump’s hate Tweets, he recognised that sometimes they have to make difficult decisions and take into account that some hate messages are part of the political debate.

On the policy side, Chiamparino stressed the role of the law defining illegal hate speech, which is a crime. However, he recognized that it is complicated to draw the line between hate speech and freedom of expression. Moreover, he described the role of the European Commission bringing together social media platforms and civil society to understand the contextual aspects of hate speech while helping companies to better respond to it.

If you were not able to participate, you can browse through the Twitter moment of the #HackHateConf to catch a glimpse of the day.